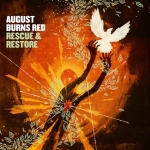 August Burns Red have been on the scene for over a decade now, which in metalcore years, makes them veterans. They’ve seen trends come and go, and have become jaded with a genre which used to push the boundaries but has since become a laughing stock. They’re not the only ones.

August Burns Red believe that the “genre used to be better than that. It can still be better than that.” And with their fifth album ‘Rescue and Restore’ they aim to put things right, promising to dish up something that pushes boundaries and gives something innovative to those who have grown tired of cliques. It’s a noble gesture and raises the expectation bar for their latest full-length.

Unfortunately, this album fails to deliver. While I was expecting something new and exciting, ‘Rescue and Restore’ is a generic metalcore album with surplus classical instruments thrown in. ‘Creative Captivity’ has a mandolin and a trumpet solo, ‘Treatment’ features a violin and there’s a couple of piano pieces dotted throughout. It’s all fairly pleasant but it just feels unnecessary. Technically, the rest of the instrumentation is solid but not ground-breaking; skilled but not particularly inspiring.

To make matters worse, two tracks on this album feature horrible spoken word sections. The line “I can’t hear your voice, but that’s ok because I can feel you in my heart” during ‘Beauty in Tragedy’ is delivered with such deadly seriousness that it becomes hilarious, ruining any emotive punch it could have had. The soliloquy in ‘Spirit Breaker’ sounds worryingly like the “Dear Diary, mood: apathetic” spoof song that was popular in 2006. In fact, 90% of this album sounds like it could have been written in 2006; it doesn’t feel modern or progressive at all.

Lyrically, while better than other bands of the genre, it’s still not awe-inspiring. The refrain in ‘Fault Line’, “Whisper your grief, scream your sorrow, proclaim your love, just don’t call me your hero” is guaranteed to be a crowd pleaser, it’s catchy and stands out, making it the album’s highlight. ‘Treatment’ is also worth a listen, managing to be both heavy and intricate, and one of the few tracks on the album that begged a repeat play.

While I respect August Burns Red of trying to revive a tired-genre, it just falls flat for me. In a genre where there’s not much worth recommending, this stands head and shoulders above the rest of the dross – but with bands like Falling in Reverse and Asking Alexandria dominating the scene, that’s not saying much.

‘Rescue and Restore’ by August Burns Red is out now on Hassle Records.