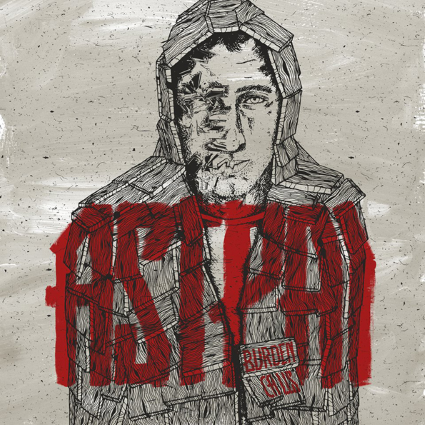 Now this is going to make it sound as if I’ve been living on the moon for the past decade, but reviewing this album was the first time I had ever heard Astpai. This is despite them having been a band for twelve years, this being their fifth full length record, and the fact that they’ve toured the UK extensively and almost always with bands I would normally go to see.

I have heard people afford the Austrian four-piece glowing praise and so got stuck into ‘Burden Calls’ with great anticipation. Opening track ‘Single Use’ did not disappoint, its lightning fast melodic hardcore bouncing haphazardly off the walls like A Wilhelm Scream but if anything with a harder edge as the song explodes into a furious, Dan Yemin-esque vocal refrain of “talkin’ bout degeneration!”

Come the next track, the sneering attitude is quickly extinguished and everything gets much more posi and upbeat, a change which actually becomes the general trend of the album. This in itself is fine and Astpai are perfectly capable of pulling off the style as easily as they can the nastier stuff. But we reach third track ‘Out’ and suddenly things very much take a turn for the worse.

I always used to criticise Belvedere, back when they were cool (yeah okay, we’re talking quite a long time ago) for being all bells and whistles and no ballsacks. They had plenty of technical ability and knew how to make pretty twiddling sounds and make their song structures fit in interesting ways around the beat and generally be all elaborate – but they didn’t really have any songs. Their tracks were like fireworks, all very colourful but easily forgotten.

Astpai definitely start suffering from a nasty case of “Belvedere Syndrome”, with both ‘Out’ and ‘After All’ just sounding like elaborate intros that go on far too long, followed by the song abruptly ending just as you were wondering when the good bit was going to kick in. Not all the songs let you down in this fashion, but there are plenty of others which seem pretty flash on the surface, yet when you boil them down to the actual riffs and melodies, it’s actually rather tedious.

It’s not always the case though. ‘Departure’ is absolutely fantastic hard-edged pop-punk which reminds me of All in a very good way, and (ironically given my previous criticism) also has a totally blinding riff on the intro. Then you’ve got ‘Resignation’, a fast-as-hell 45 second blast of hardcore that very much goes to show when Astpai keep things simple, rather than try and over-elaborate, they sound fantastic. I’ve made that comment in reviews so many times I feel like I’ve got déjà vu.

I feel pretty disappointed that I didn’t like this because Astpai seem like some seriously hard-working, committed dudes who have plenty of heart and love doing what they do. I’m pretty sure this means they’ve also learned to deflect criticism. But I just couldn’t feel like ‘Burden Calls’ had anything like enough real tracks, enough killer tunes to make people want to go crazy. And that’s what this is all about.

‘Burden Calls’ by Astpai is out now on Ass Card and Jump Start Records.