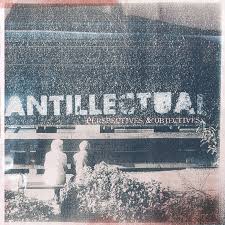 European punk rock torch-carriers Antillectual are back with a full length follow up to last year’s ‘Future History’ EP, titled ‘Perspectives & Objectives’. Based in the Netherlands, the band claim to create their own unique blend of stolen riffs and borrowed song titles. However true, I can’t say that was a sentence I expected to read on any press release, but I promise the quality of the tracks on this record helped me forget that very quickly.

There is one instant factor that I adore about this record, which is the 90s skate punk influence. It perhaps shines the brightest of all Antillectual’s influences throughout the whole record, which I think is a huge positive on the whole, or at least it would be if they played up to it a little bit more. When they stray away from the skate punk sound we were introduced to with the opener ‘Soundtrack’, the songs just don’t seem to measure up. The more modern sounding tracks like ‘With Gaga On Our Side’, ’Pink Print’ and ’Bullies’ don’t quite get me going like the more Bad Religion/Descendents influenced tracks, such as ‘Soundtrack’, ‘Welcome To The Jungle’ and ’Work Horses vs Show Ponies’ do and I think this album would possibly benefit from Antillectual sticking to what they are best at.

Although those more modern sounding tracks aren’t bad by any means, I just feel like Antillectual’s song writing and more importantly the main vocalist’s voice (all three members sing at some point, so I’m not 100% sure who the main vocalist is) both lend themselves to be best accompanied by fast guitar riffs and those gallopy skate punk drums that we all had drilled in our head from playing too much Tony Hawk’s Pro Skater in the early 2000’s. That being said, if the faster more old school tracks hadn’t set the bar so high and I think the rest of the album still does hold up on it’s own – just for a different audience. If you look at the list of bands Antillectual has toured with you see names like NOFX next to names like The Gaslight Anthem and names like Bad Religion next to names like Hot Water Music. So, in this case it seems like covering all grounds has actually paid off in terms of gaining a wide array of audiences, which is undoubtedly what Antillectual are aiming to do.

In conclusion, the only thing I dislike about the record is the preview of how well Antillectual can write pacey, thumping skate punk only to fill up most of their album with – albeit still good – slower, more drawn-out sounding punk tracks. The highlights for me are the previously mentioned ‘Soundtrack’, ‘Welcome To The Jungle’, ’Work Horses vs Show Ponies’ and lastly ’Mother Inferior’, where the Bad Religion and Descendents influences are ever prominent. Once you understand the audience Antillectual are trying to please, it’s easier to understand the reasoning behind their desire to mix up the genres on the record ever so slightly, and on the whole they do a very good job of it – so I think that should be applauded. I can see the album being a crowd pleaser, but on a personal level for me there’s just not enough of what I like to hear most from them.