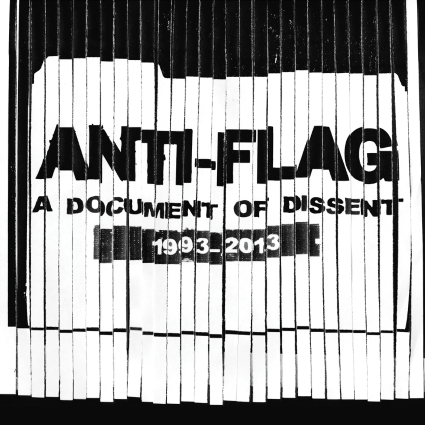 It’s all too easy to write off Anti-Flag as the poster-boys of point-blank political punk. Their blunt, anti-authoritarian agenda is on the same side of the political spectrum as Propagandhi, but in terms of the depth of their arguments and the complexity of their message the two bands are worlds apart.

For this reason I was ready to pan this album, a commemorative collection of songs to mark the band’s 20 year career, and then I listened through and realised I was wrong. Despite their route one values, Anti-Flag’s music has adapted wonderfully to the passage of time, producing some fantastic songs and never losing focus. The reason I loved this band as a teenager wasn’t just because I was less cynical. It’s because they were damn good.

“You’re gonna die gonna die gonna die for your government, die for your country that’s shit!”  The opening line of first track ‘Die For The Government’ would make an intelligent libertarian weep, but so what? It’s got to be one of the most recognisable lyrics in the whole of punk rock, and that means that Anti-Flag have already won the war.

The tracks on ‘A Document of Dissent’ run chronologically starting with their early output, and  whilst the band’s 90s releases were a little more scattergun in terms of their structure and flow, this was still an era that produced some fan favourites including the fantastic ‘A New Kind of Army’ and the wonderful ‘That’s Youth’, which has a real classic 80s hardcore vibe to it.

The early noughties heralded the release of ‘Underground Network’ and the beginning of a heavier and more melodic Anti-Flag. This is paid homage with the inclusion of ‘Angry Young and Poor’ and ‘This Machine Kills Fascists’, which is such a rip-roaring burst of pent-up aggression against intolerance that it makes you want to throw your Noam Chomsky on the floor and pump your fists in the air.

We’re then taken forward to the finest period in the band’s career: the release of ‘The Terror State’ in 2003. Tracks like ‘Turncoat’ and ‘Power To The Peaceful’ are downright brilliant and are akin to the new melodic hardcore sound that was emerging at the time from bands like Strike Anywhere and Rise Against. Anti-Flag saw all this as positive for punk rock and embraced the change, writing music that was every bit as on the pulse as their younger peers.

Next we’re taken through the ‘For Blood and Empire’ era, a time when the band’s music took it’s foot off the gas and became a little more reflective, lost a little edge and maybe even felt the smallest bit jaded. But with ‘The Bright Lights of America’ released in 2008 they redressed the balance and found their swagger again, as you’ll hear from the title track which can be found on this release.

‘A Document of Dissent’ ends with a few tracks from their more recent releases such as ‘The People or The Gun’ and ‘The General Strike’, which are all strong and representative of how they have never lost their desire to make their fans happy, which after twenty years is massively commendable. If you want to introduce a younger sibling or (dare I say it) son or daughter to the world of punk rock this is one hell of a starting point. A band who have seen and done it all and spat on the corporate tee shirt.