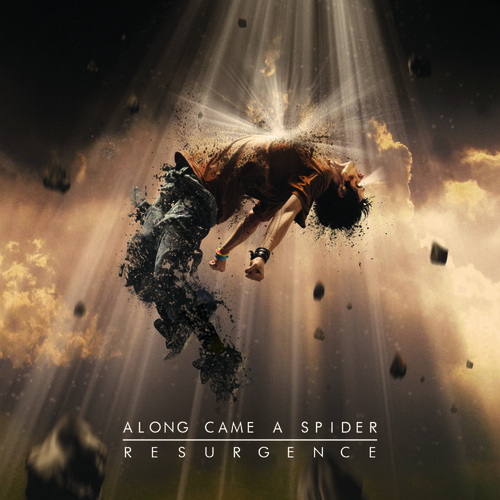 As a music writer I have to admit it’s an awful characteristic to judge a band before you hit that play button. Yet that’s what I did with Along Came A Spider’s sophomore effort – ‘Resurgence’. I had a preconception that it would be another run-of-the-mill US metalcore record hastily put together. Having hit the play button and listened to record on repeat a number of times, I can say ‘Resurgence’ isn’t quite what I anticipated.

Admittedly their is a strong sense of metalcore from the outset. Tracks like ‘A Sirens Call’ and ‘Wanderlust’ have traits that fit the template; sharp riffs, melodic/aggressive vocals and polished production. However they give the album a promising start. The latter track has addictive “woahs” giving it plenty of staying power. Whilst ‘The Voice of the Voiceless’ provides an early highlight with its catchy chorus.

As you delve deeper into ‘Resurgence’, there’s a realisation that ACAS have, to a certain degree, versatility. Both ‘No Laws’ and ‘A Link To The Past’ are thrashy with soaring vocals. ‘Land On’ is theatrical with dwindling piano keys and male and female vocals. There’s enough there to keep you interested for the meantime.

Despite this, it’s the later stages of ‘Resurgence’ that suffers. Songs such as ‘Slide’ and ‘Metamorphosis’ prove to be ineffective and sees the band just going through the emotions, delivering an abundance of filler along the way.

No doubt the band has talent and Jamie Miller has a great set of lungs. Yet it’s not enough to save ‘Resurgence’. Although it shows early potential, you’re ultimately let down by the sheer weight of standard, rehashed metalcore that we’ve come to expect from the likes of Along Came A Spider.

To an extent it matched my preconception yet ‘Resurgence’ does offer moments that keeps your attention, but unfortunately it’s not consistent enough.

My advice to them would be to cut out the predictability and build upon the versatility that is shown here and there on ‘Resurgence’. Then they could become a band that has the chance to step out of the overcrowded American metalcore scene.

‘Resurgence’ by Along Came A Spider is out now on Standby Records.

Along Came a Spider links: Facebook|Twitter