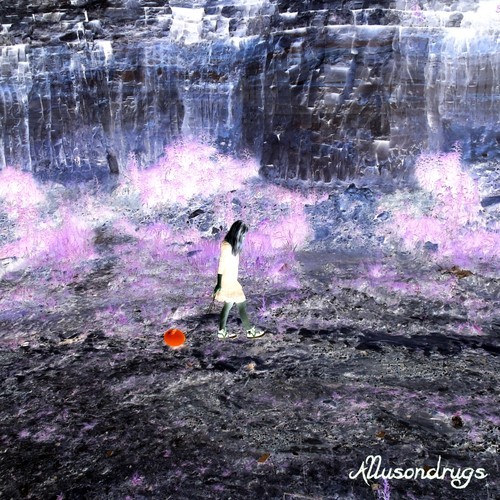 Even now, 5 years after its release, Brand New’s ‘Daisy’ is still a monumentally divisive record. It can never be looked back on in a nostalgic light (or at least not until they record something new), because the debate still rages over whether it was a solid contribution to their excellent canon, or the worst musical decision since Lars Ulrich thought that ‘St Anger’ snare sound was cool. There are those out there that appreciate Brand New’s most recent effort though, evidently among them Castleford quintet Allusondrugs, who take that album’s template of fiery grunge tempered with expansive, introspective moments, and fuse it with a love of classic grunge/alt rock in the vein of Nirvana and Pixies, much like their West Yorkshire compatriots Dinosaur Pile-Up.

With the exception of ‘Cherry Pie’, which throws the cat amongst the pigeons with a snotty blast straight outta ’92, this eponymous record follows a similar course right the way through, which makes for a solid debut EP singling Allusondrugs out as a band to pay close attention to – in a sea of bands aping ‘Your Favourite Weapon’-era Brand New, ripping off their sound from after they became interesting is an attractive USP. However, where musically and in vocal delivery it approaches the New Jerseyites, the lyrical content, at least in the first half of the release, is pure slacker-centric, as evidenced by their name and song titles like ‘Ted, What’s The Porn Like In Heaven?’.

Following the halfway mark of the aforementioned ‘Cherry Pie’, the band’s true strengths emerge on ‘Nervous’ and ‘Sunset Yellow’. The former shows a frank honesty in its lyrical content and allows the layered lead guitar to take centre stage; whilst this cages the growling lower-end slightly, it gets the balance just right between grace and power. ‘Sunset Yellow’ is a personal highlight of this release, the band’s dual vocal inducing bliss on this downtuned number – shimmering guitars and Beach Boys-esque harmonies lead into a soaring guitar coda that’s snuffed out far too soon.

This six-tracker is closed out by ‘Thingio’, a culmination of all the facets presented by Allusondrugs on this self-titled effort, a mid-tempo, fuzzy number featuring frontman Moules’ best vocal performance yet, evolving into the kind of coda to smash your instruments along to. One to enjoy in the thus far unabating sunshine we Britons are currently experiencing, Allusondrugs have here presented a picture of a band on sure, strong footing right from their initiative release, a rare thing indeed. Even if ‘Daisy’ wasn’t your bag, you’re sure to find something else to enjoy about these Yorkshire lads – it’s indie rock and grunge without sounding like Basement. That’s got to be worth something, right?