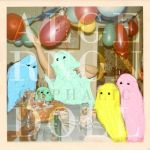 Do the (relatively) sunny days get you yearning for the grunge and indie bands that defined the warmer months for every generation of rock lovers since the early 90s? Are you spinning classics like Nirvana’s ‘Nevermind’ and The Smashing Pumpkins’ ‘Siamese Dream’ with all those beautiful, booming anthems that seem to melt into your mind with the heat?

Then it could quite easily be the case that Algernon Doll are your next favourite band. At just 24 years of age, Ewan Grant has dropped his one-man persona and gone for the full monty, as he explores the alternative guitar sounds of a musical age he was far too young to have experienced first-hand, yet is nonetheless hugely influenced by – an influence he makes commendable use of.

As soon as opener ‘Spilt Milk Perfume’ flows out of the speakers, you feel yourself standing in the haze of the festival with the buzzing ambience of crowds drifting past you and a mellow, sweet guitar sound, drifting and floating yet weighted by bass; keen and full of depth and body. The vocals are drunken and almost unconscious but pregnant with feeling.

There’s a keenly felt Pumpkins vibe to ‘Tamed’ with its beefy, dirty riffs that explode with sunshine, and yet also you can feel the gentle playfulness of the Pixies, as the music dances, distorts, morphs and twitches to keep you guessing as to what’s happening next. Other tracks like ‘Suicide’ borrow more from Nirvana, with dark themes dwelt on with a sunny disposition and angular, haywire riffs setting the mood.

‘Sweet Nothing’ is a different proposition: a shimmering indie-rock anthem that recalls all those bands like Ash, Feeder and Supergrass that you almost forgot meant so much at the time. Algernon Doll are careful not to detonate like a straight-up rock band – they aren’t meant to create moshpits. They grab you by the arms and swing you round and around as the long grass brushes your legs and you feel dizzy.

Odd tracks like ‘Relate’ are perhaps a little flimsy and lacking in purpose, whilst ‘Pink and Blue’ kind of drones on and on without really going anywhere, but even these mistakes are just imperfections and forgotten inaccuracies in a display of youthful energy and creative fluency from Algernon Doll.

Put down the punk rock for an hour or so (we don’t recommend more than that) and let yourself be lulled into gentle submission by music from Generation X re-created by a British millennial. You won’t regret it.

‘Omphalic’ by Algernon Doll is out now on Struggletown Records.