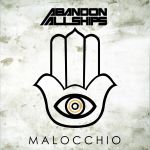 On the whole, as a nation, Canada has been rather good at producing top-notch, globe conquering rock bands. Unfortunately, Toronto’s Abandon All Ships appear to be doing their level best to piss thoroughly all over that reputation.

On paper the band, who have returned with third album ‘Malocchio’, should be (and in some cases probably are) a scenester’s wet dream, combining Hardcore with Dub-step and European trance. In practice the blend doesn’t work in the slightest, not helped by the band taking the most clichéd and mediocre aspect of each sound. Bands regularly complain about writers trying to pigeonhole their sound, so in the finest traditions of this ‘Mediocore’ anyone?

The overall sound is cluttered, confused and unpleasantly bewildering on the senses. It feels like being locked in a ‘cool’ club night with DJ’s at opposite ends of the room blasting out low-grade slices of Hardcore and Dub-step at the same time while everyone else flexes their muscles in their Honour Over Glory Tees and necks Jagerbombs.

Occasionally a half decent chorus lurches haphazardly out of the stumbling, plodding verses but so fleeting is the listening pleasure, that you’re soon back to wanting to lob the music playing device in question squarely out of the window.

Lyrically, Abandon All Ships are pretty unimaginative and about as subtle and poetic as a brick, so it’s not even possible to claw ‘Malocchio’ back some points on that front.

If you prefer style over substance, posturing over creativity or are enough of a cretin to have addled your brain with substances really meant for horses or pot plants, you might like this. Anyone else turn and run, fast and far, far, away from this musical abomination.

‘Malocchio’ by Abandon All Ships is out now on Rise Records.