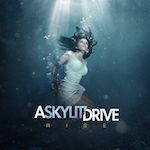 American post-hardcore group A Skylit Drive are finally back with the release of their fourth studio album ‘Rise’. The record showcases the bands level of growth since their previous record ‘Identity On Fire’, it’s more professional; more grounded; and solid. The songs have also progressed lyrically, featuring more creative catchy hooks.

Whilst listening to the tracks, they all seem to merge into one. Unfortunately the group haven’t mastered diversity with this one, they all seamlessly blend together. One track that manages to stand-out is ‘Just Say’ a melodic slow-paced hit which begins with playful riffs and enchanting angelic vocals. The song features awe-inspiring violin sounds, a hypnotising harmony, and emotional hard-hitting lyrics: “I won’t see you for miles, hoping every day you find the strength to stay with me, I’m crippled by the sound you make when I walk out”.

The other hits feature the usual heavy beat, ferocious vocal screams, electrifying riffs and speedy-melodies. However, there’s just nothing new, nothing which sets it apart from all the other metal releases this year. There’s no doubt that A Skylit Drive are talented, and their instrumentals are still outstanding – it’s just not innovative.

Fans would of already heard the pre-released single of the title track ‘Rise’, which is the top hit from the record. It has a good catchy chorus to sing-along to, as well as hard-hitting brutal screams and powerful riffs.

It’s undoubtable that this is A Skylit Drive’s best album yet, and it’s different to their previous work. Lead singer Michael Jagmin has lowered his vocals tones, and screamer Brian White now has an intense vocal range. The group have smoothed out the creases that were once there, and have created a mature and more vocally driven record. Unfortunately the tracks are all just too similar.

But I have to admit, I like the album – I’m a massive fan of powerful hardcore metal. The tracks are really good, the vocals are impressive, the lyrics have catchy one liners, the breakdowns are heavy, the melodies are awesome – but it’s nothing I’ve not heard before. ‘Rise’ just fails in really standing apart from the other amazing post-hardcore releases we’ve already heard this year. The tracks simply lack in diversity and innovation, but if you’re a fan of this type of genre and want something easy to listen to, you might as well give it a go. It’s just not going to win any awards for spectacular musical innovation.