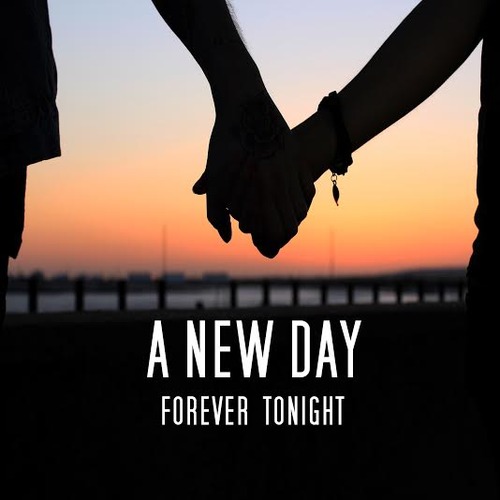 Essex four-piece A New Day like to keep things simple. They keep things so simple in fact, that they make Simple Plan (a considerable influence on the band) sound like math rock. But as everyone who loves pop music can attest to, there’s every bit as much skill involved in writing well with three chords as with more complex structures.

I’m not going to lie to you, if you aren’t into the more pop-orientated sensibilities of the rock spectrum you may as well stop reading now, because these guys are about a hair’s breadth away from Five Seconds of Summer. It’s chart music with some punky edged guitars in. It’s about girls, sunsets and high hopes  – so if you’re looking for bad attitudes, the smashing of systems or beefy breakdowns, then look elsewhere.

We’re talking sugary sweet, misty-eyed college rock. But it’s definitely got more cut and thrust to it than many of their stateside peers. The chorus of first track ‘Boyfriend’ has got real verve to it with lead and rhythm guitar combining slickly to give their sound plenty of va-va-voom.

‘Call You Mine’ recalls ‘Take Off Your Pants and Jacket’ era Blink-182 minus the swears. It’s got a real feel-good vibe to it, a kind of adolescent excited nervousness that reminds me of listening to pop punk in my bedroom and wondering how many cool things I’d do when travelling the world with my band. It’s free of cynicism and full of optimism and it’s hard not to warm to.

The last song of the three track EP, ‘Faith In Me’, is the only real let-down. It lacks the character and vigour of the other two tracks has quite a few annoying bits in like a really throwaway woah-ohhh bit and the fact they actually use “hey ho let’s go!” as a backing vocal at one point which feels a like a desperate punk reference.

Overall though, this is a stirling debut from a bunch of lads who have got plenty of time on their side, and really know how to channel their optimism into their music.

‘Forever Tonight’ by A New Day is out now.