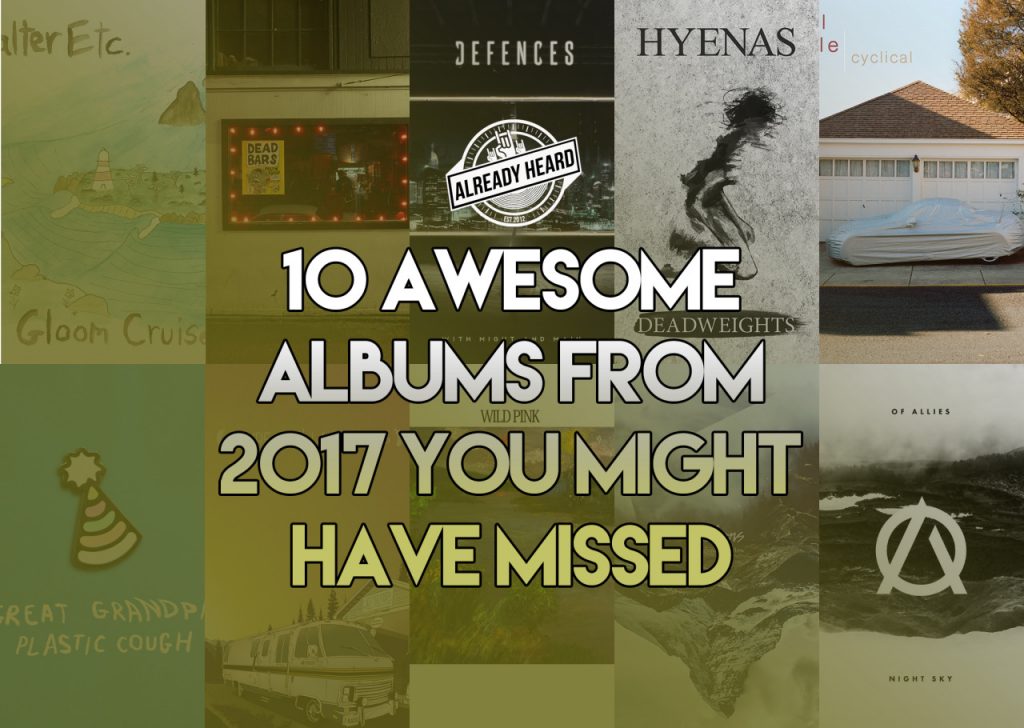 You’ve surely now seen Already Heard,’s Top 10 Records of 2017 and debated, deliberated and decided on your own favourite album. But we’re not finished with our 2017 review just yet…

Already Heard’s Top 10 Albums are decided by a site-wide staff vote. And, while this is democratic and excellent for deciding on a site favourite, it skews the list in favour of albums more staff have heard.

With that in mind, here’s our annual round-up of 10 of the best albums that were selected by only one or two members of staff, unranked and presented alphabetically, purely because they all kick ass! There’s something divertingly whimsical about Dead Bars’ ‘Dream Gig’; a snotty semi-concept album about an ageing rocker (we’ll call him John Maiello – because that’s who it is), still grasping at the idea of playing his dream gig (that being to open for the Bouncing Souls). Yet, you’ll be hard-pushed to find an album that’s has much heart or is as much fun from the last 12 months. It’s a triumph of underdog does good rock’n’roll, played without being overly sentimental, and grounded in modern day mundanity.

The result is a front-to-back riot of grin-inducing pop-punk and fist-in-the-air anthems that possess hidden lyrical depths and a healthy dose of optimism. Best of all though, ‘Dream Gig’ is so good, it’s a monumental step towards making Dead Bars’ dream a reality. (Rob Mair) Hertfordshire’s self-proclaimed ‘alternative metal’ band Defences really showcased their ability to adapt and incorporate different sounds, covering a mix of metal subgenres such as symphonic metal and post-hardcore on the excellent ‘With Might and Main’.

It’s an album that’s not tied to the conformities of the metal genre too, yet still maintains a mature polished sound. It opens with the beautiful instrumental track ‘Re Emerge’ where lead singer Cherry Duesbury’s voice creeps through the atmospheric piano in whispers and echoes “I’m not dreaming, I’m not dreaming anymore”. Before long, the crescendo of her voice leads into the next track ‘The Takeoff which is where things really do take off, with a striking drum intro and lively guitar riffs they pick up the pace.

Throughout, they maintain this pace, displaying a lyrical and musical maturity that makes you want to bang your head, while simultaneously pulling at your heartstrings.
Having formed in 2013, Defences have worked exceptionally hard to define their own sound – and that graft has paid off handsomely. Look out for more big things from them in the new year. (Angelah Betmead) Specialising in woozy, grunge-infused indie-pop, Seattle’s Great Grandpa delivered one of the most consistently infectious albums of the year with the charming – and occasionally punchy – ‘Plastic Cough’.

That it possesses an off-beat sense of humour – it finishes with the exceptionally staged ’28 J’s L8r’, a song about getting the munchies during a zombie apocalypse – just adds to the appeal of an album that is brilliantly written, packed full of character and brimming with razor-sharp hooks.

Yet, for all the frivolity, there’s a serious side to the knockabout charm, and few songs of 2017 are as effective or powerful as ‘No’ and the heart-breaking ‘Faithful’. Marrying style and substance with deft aplomb, ‘Plastic Cough’ is a gem that deserves to be treasured. (RM) Arguably the most exciting, and criminally overlooked hardcore debut in 2017, this record from Nuremberg’s Hyenas is a noisy, frenetic mathcore outing that nevertheless encompasses a wide range of styles in its 27-minute runtime.

Whether tackling the sheer, visceral heaviness that’s a staple of hardcore and mathcore in the album’s shorter tracks, or incorporating melodious elements, Hyenas excelled at everything they try. Make no mistake, ‘Deadweights’ is the aural equivalent to being punched repeatedly in the stomach, even on its more sombre, sparse tracks.

In fact, it’s this variety that has helped Hyenas create a record worthy of such praise, creating an original and interesting sound that places the band head and shoulders above a lot of bands in a scene that can sound stagnant and monotonous. Even more exciting is that this is a debut, and the band are so musically accomplished at this early stage of their career that it makes one wonder what they’re capable of creating a few years down the line. A must for fans of in-your-face, uncompromising heavy music. (AC) ‘Landmarks’ could have rubbed shoulders with The Get Up Kids’ ‘Something To Write Home About’ and The Promise Ring’s ‘Nothing Feels Good’ as a touchstone of the late 90s’/early 00s emo/pop-punk sound. That it arrived 15 years too late doesn’t mean it sounds dated though. Instead, it’s a timely reminder of what made that wave of music so essential and life-affirming for an entire generation.

It’s smart stuff too, taking that classic sound and refracting it through the challenges faced by those in their late 20s and early 30s. You’ll find no adolescent histrionics here, just vocalists Erin Power and Giancarlo Talarico working through shit as best you can when life starts to get truly messy.

Key to ‘Landmarks’ success is the relationship between the two, the duelling vocals offering a different layer – and interpretation – to both the sound and the story. For those who get all misty-eyed at nostalgia, ‘Landmarks’ is an album not to be missed. (RM) Of Allies have finally started fulfilling the promise of their early EPs, delivering the goods in style on their debut full length ‘Night Sky’. From the atmospheric chords leading into the title track, through to the pulsating climax of ‘In Low Light’, this is the sound of a band punching way above its weight.

The four Yorkshiremen have found that ever elusive balance between genuinely bruising alternative rock, writing well-thought-out songs and nailing a killer pop melody. The result are songs that linger in the memory and stand up to heavy rotation, be it the earworm hooks of ‘Collapse’ or ‘Run’, the epic mastery of the climactic centrepiece that is ‘Open Sea’ or the all-around killer tune of ‘Glass House’. Putting it in no uncertain terms, there is not a duff track in sight, even the atmospheric interludes serve a purpose, tempering the flow between one section and another.

Make no bones about it, this is a band deserving of much bigger things; musically they are as tight as they come and offer up plenty of versatility, while in Rich Nichols they have a supremely talented vocalist. This is a damn good record, end of story. (EL) Patrons – As Above, So Below

The ragged post-hardcore sound of Plymouth rocker’s Patrons was one of the most exciting debut albums of 2017. Boasting a bunch of well-constructed songs, a variety of quality riffs and absolutely superb vocals, ‘As Above, So Below’ provided ample proof that British rock is alive and kicking.

Without a hint of filler, this is a pretty damn impressive record that succeeds in sounding unique while being packed with plenty of easily relatable material. From killer hard-rocking choruses like that found on ‘First of the Slow Burners’ to the gutsy ‘Shapes in Nature’, or the aggressive ‘War and Pieces’, there’s an edge to ‘As Above, So Below’, tempered by the more introspective moments, such as the excellent ‘The Art of Conversation’ and ‘Listen’, which drip with brooding emotion.

Whether they are wearing their collective hearts on their sleeves, nailing banging choruses or simply rocking as hard as they can, this is a record packed with power, energy and emotion and well worth playing over and over again. (Edward Layland) A record which explores subjects such trauma, depression, heartache and most importantly, getting better may not be key criteria for one of the top records of 2017 –yet Small Circle’s debut full-length Cyclical tackles some bleak issues in a beautiful way.

Brought together by members of Sorority Noise and newcomer Marissa D’Elia, ‘Cyclical’ has a hazy, laid-back feel, which gives the misconception that this a chilled-out record, when at its heart is raw emotions. Alongside warm, refined guitar work, D’Elia finds her voice in a soft soothing tone which makes for a very relatable narrator throughout.

Songs like ‘Vague Consensus’ are prime examples of what this band are all about, up tempo beats, but with really heart-wrenching lyrics topped off with a sweet melody. In Cam Boucher there is a musician who just seems to turn everything he touches into gold, but with the addition of D’Elia taking the lead, the pair’s voices really complement each other and give a unique voice to this record. (TB) We’ve been huge fans of the New York-based group since we first heard debut EP ‘Good Life’ back in 2015, and ‘Wild Pink’ more than delivers on this promise, propelling the group’s literate sound and dense themes to stratospheric new heights.

And, despite the weighty lyrical nature, it has moments of clarity – fun even – that demand repeated listens. ‘Great Apes’ and ‘Wizard of Loneliness’ are brilliant, albeit twisted, pop songs that come with skyscraper-sized hooks. Few albums in 2017 have painted a world – both the good sides and the bad – so vividly, and for that alone Wild Pink should be applauded. (RM) By the time the glorious and uplifting ‘Baby Blue Hammock’ fades from view, it’s gentle piano line and breezy tone disappearing into the distance, it’s hard not to feel elated and renewed by Walter Etc.’s effervescent indie-pop.

Yet, such feelings of joy are somewhat at odds with the sombre lyrical tone of ‘Gloom Cruise’. Sure there are moments of whimsy; the character study of free spirit Petunia (‘Petunia You’re Home’), or the spectacularly wry horoscope that comes from being born on ‘April 41st’ both sure to raise a smile. But there’s so much subtlety and shade to Dustin Hayes’ lyrics, ‘Gloom Cruise’ feels like a sprawling exploration of childhood homes, adolescent endeavours and challenges of mental health.

It culminates in the aforementioned ‘Baby Blue Hammock’, one of 2017’s most wonderfully positive anthems and a winning take-home message of resilience in what has been, at times, a trying year. (RM)